The November meeting featured our annual Art Mart. The proceeds went to help fund the Mitzi Hunter Scholarship for a Tarpon Springs High School senior art student. Here below are pictures from the meeting.

Our first official meeting of the year was held on October 16. Our guest speaker was Dr. Abbot, cardiologist from AdventHealth North Pinellas. He gave good, interesting information on “How to Live to be 100”. Additional speakers were City Commissioner Rea Seiber, who gave a presentation of her trip to sister cities in Greece; Betty Purchase, who began a program of making caps for premature babies in South America and now has begun to promote knitting/crocheting caps for non-premie babies. She has taken over 2,000 tiny caps to South American countries that have been made by our members. Clint Elbow, President of United Nations Assoc. talked about a refugee program called “Picture My Life”, which was well received. Below are some pictures from the meeting:

Saturday, October 12 was the date of our WCTS new member orientation. There were 17 new members added to our club and the orientation taught them all about the different facets of this international organization, the General Federation of Women’s Clubs. Below are pictures of the new members. The top picture is all new members together. Below are smaller groups with names.

Our First Friday booth has brought in several new members. (LtoR) Mary Egeland, Sharon Walling and Linda Eisner talked to many people at the event on Friday, October 4.

On Wednesday, September 18, the GFWC Woman’s Club of Tarpon Springs held our annual Membership Tea. This was a very successful and fun event, adding 10 new members to our club. President Dee Isguzar honored ladies who were 90 years of age and older, and (past GFWC Florida President) Carole Weaver, as club founder Soledad Bonillas de Safford, gave a history of our club. There were 150 members and guests in attendance at the Tea, which was held in the Tarpon Springs Yacht Club. Below are some pictures from the Tea. In the first picture, Sherri Patterson and MaryAnn Cozzens painted the Eagle, which is the symbol of the Everglades, which we support. The Eagle was auctioned off at the state convention in Orlando. In the right hand photo, second row, Sherri Patterson presented our Women on the Way (WOW) students, Barbara Socha and Lisa Hunt, with a check for $500 each for their scholarship. Another $500 will be presented to them in April. 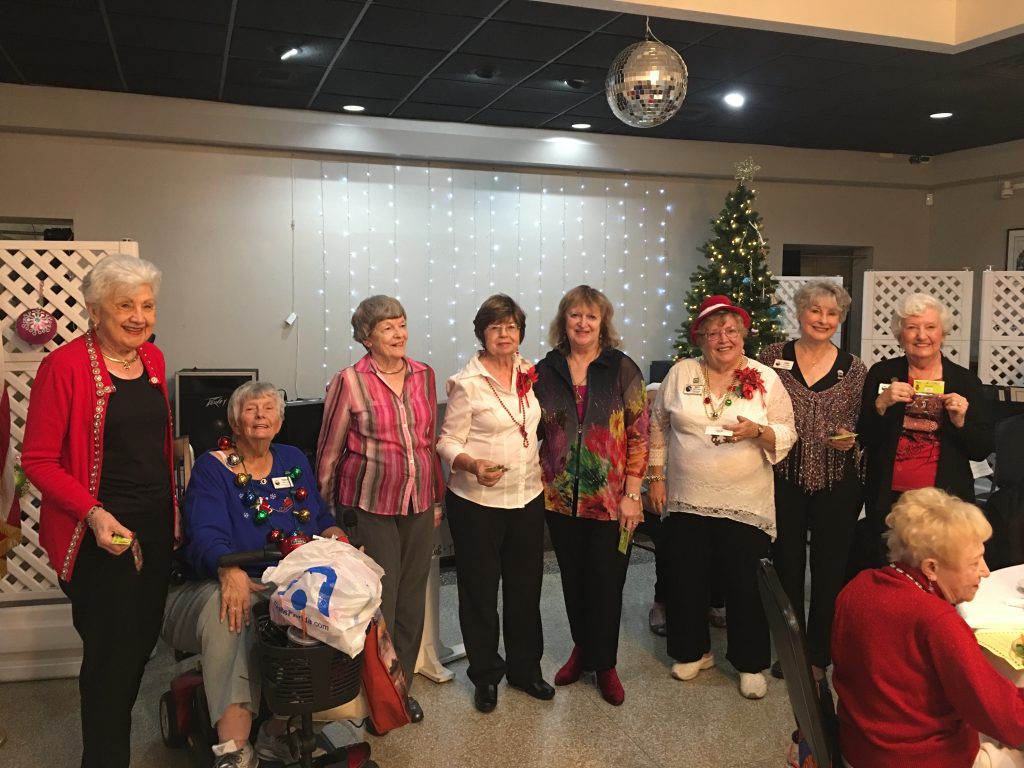 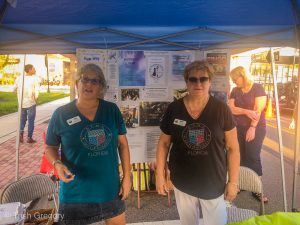 Linda Eisner and Mary Egeland are taking care of our booth at the Tarpon Springs downtown First Friday event. Stop by next month and say hello to them. They have all the information about our club. 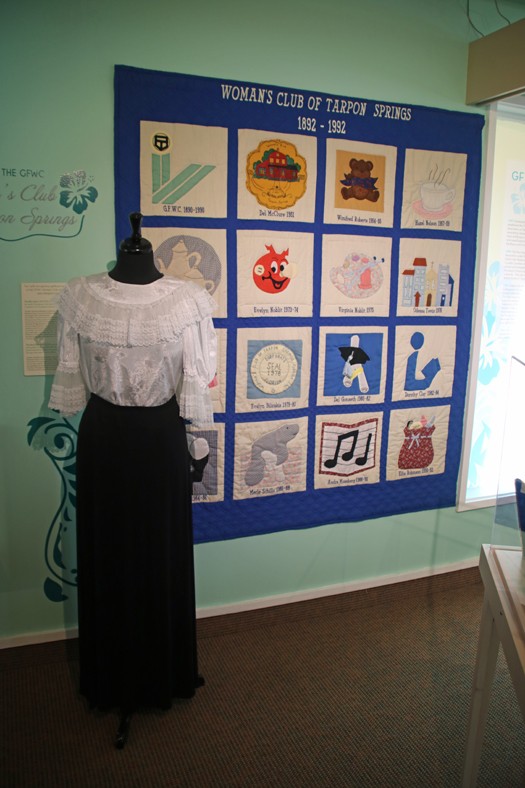 This is a quilt made by member Diana Burns to commemorate some of the past Presidents of our club. It is hanging in our club’s history display at the Heritage Museum in Tarpon Springs. 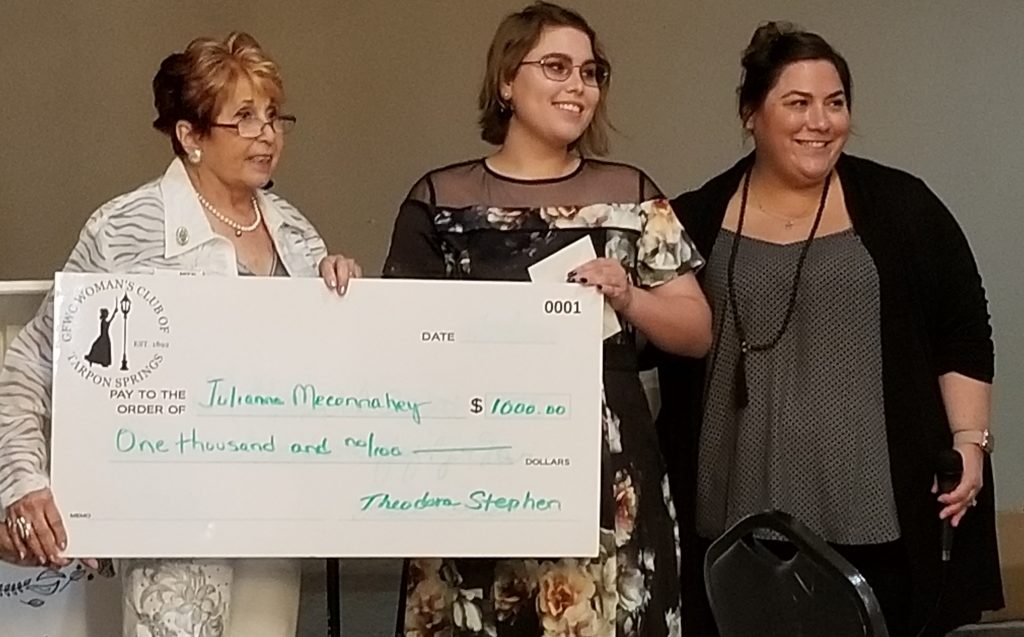 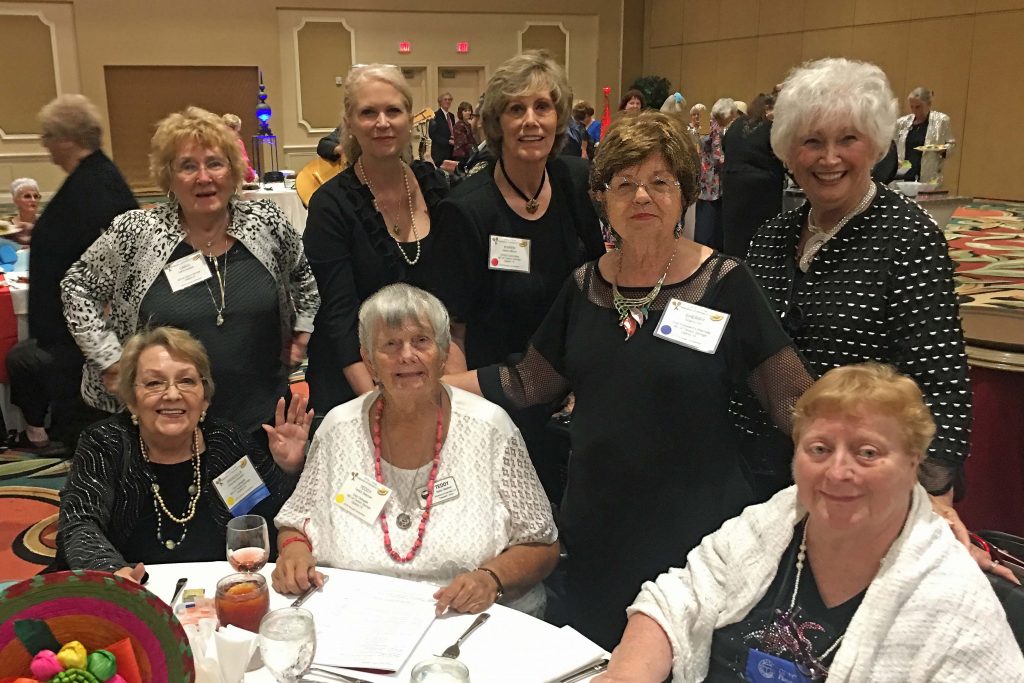 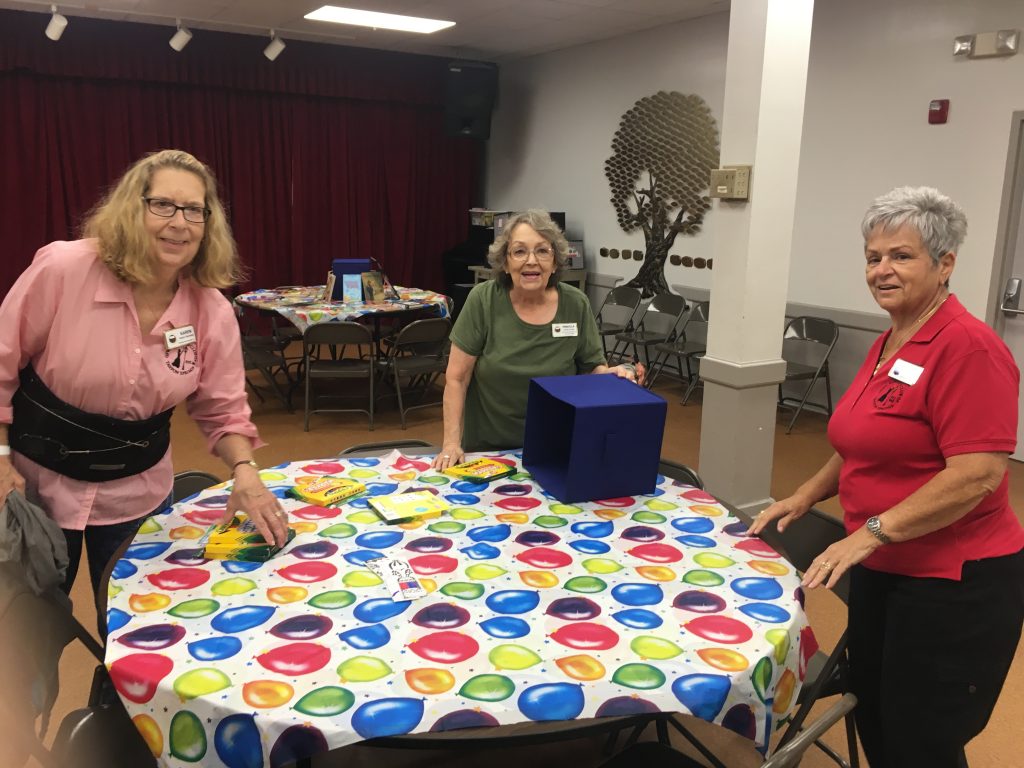 Our club is participating in the Book Hero’s program, which is a state project. 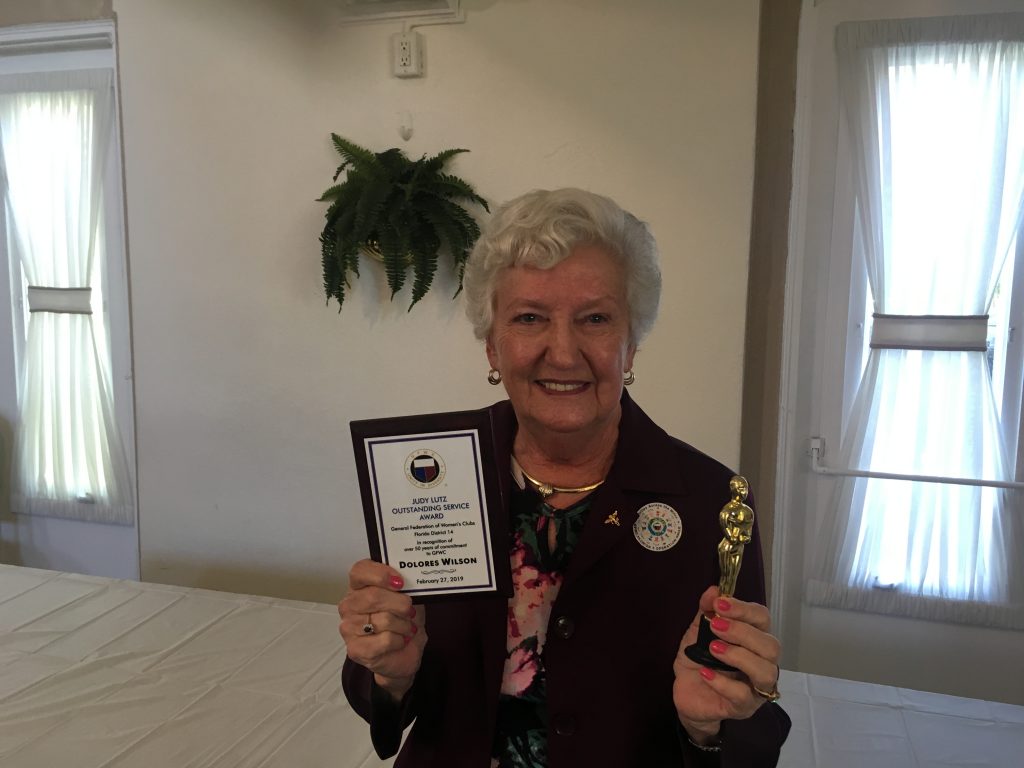 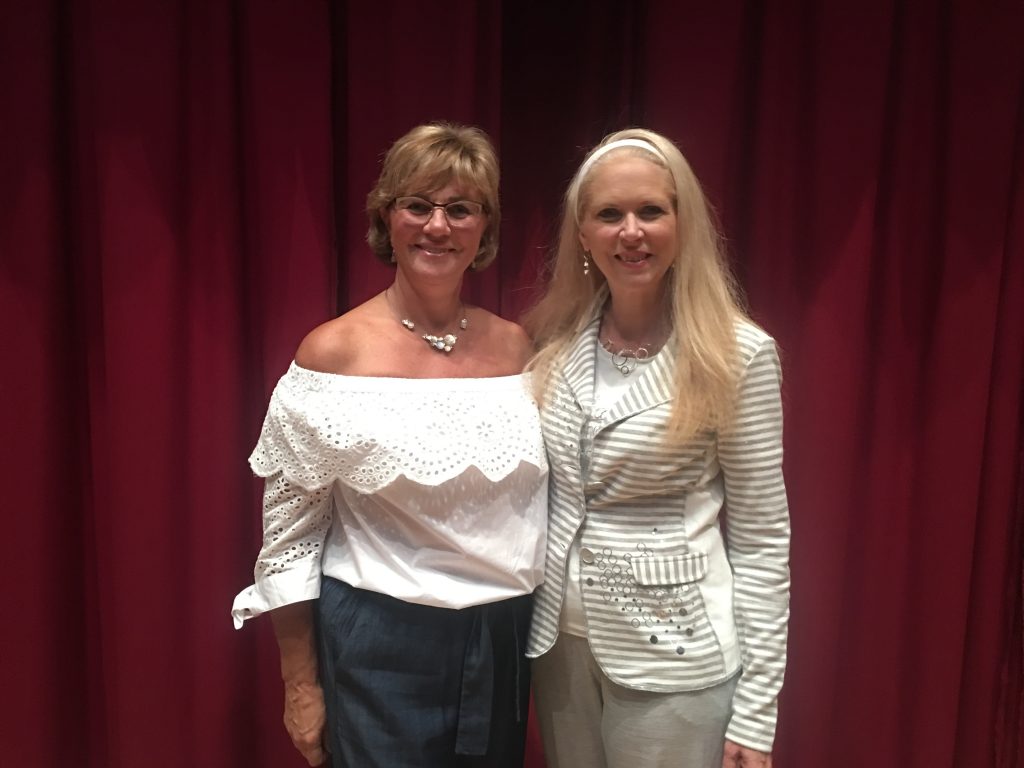 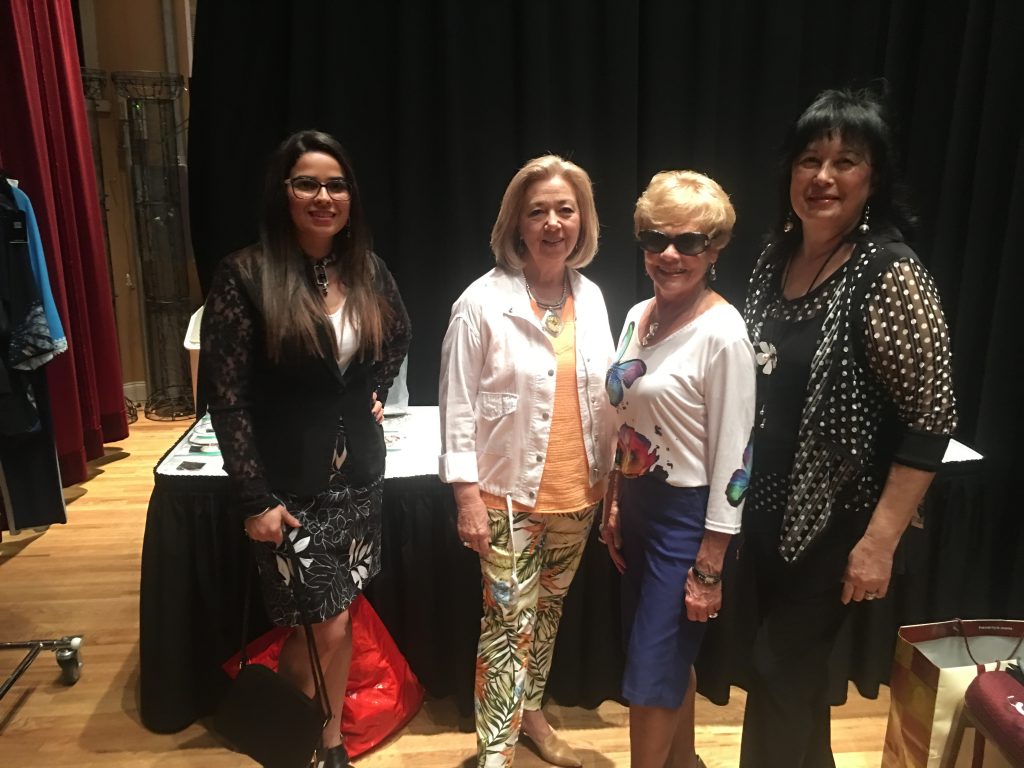 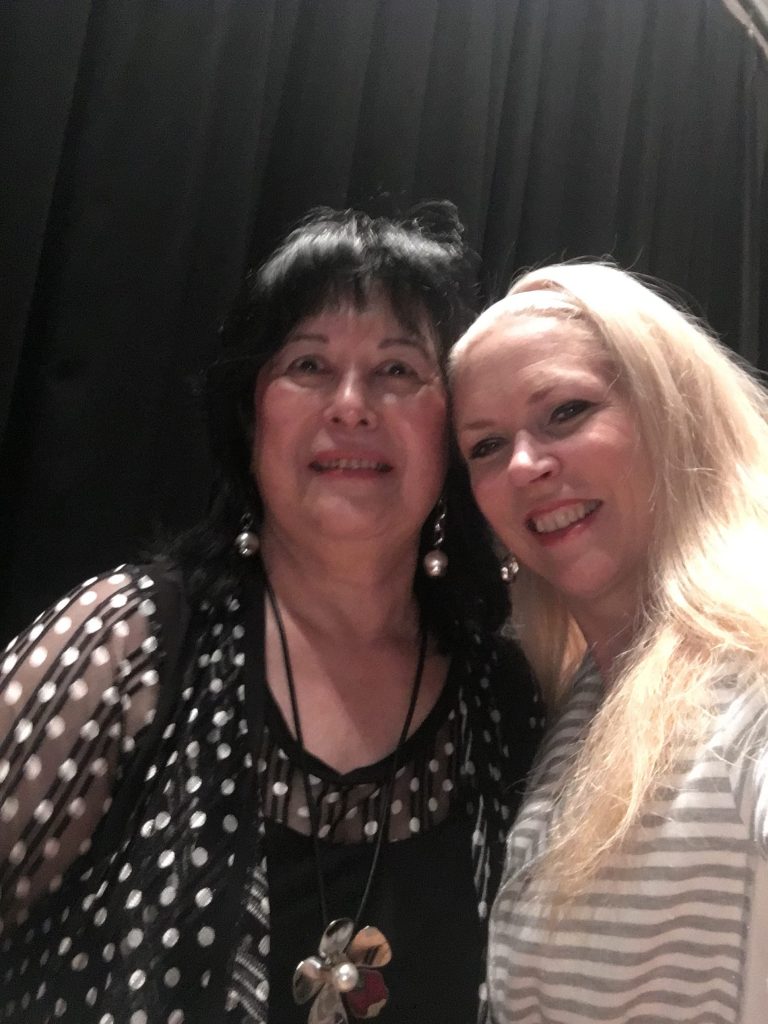 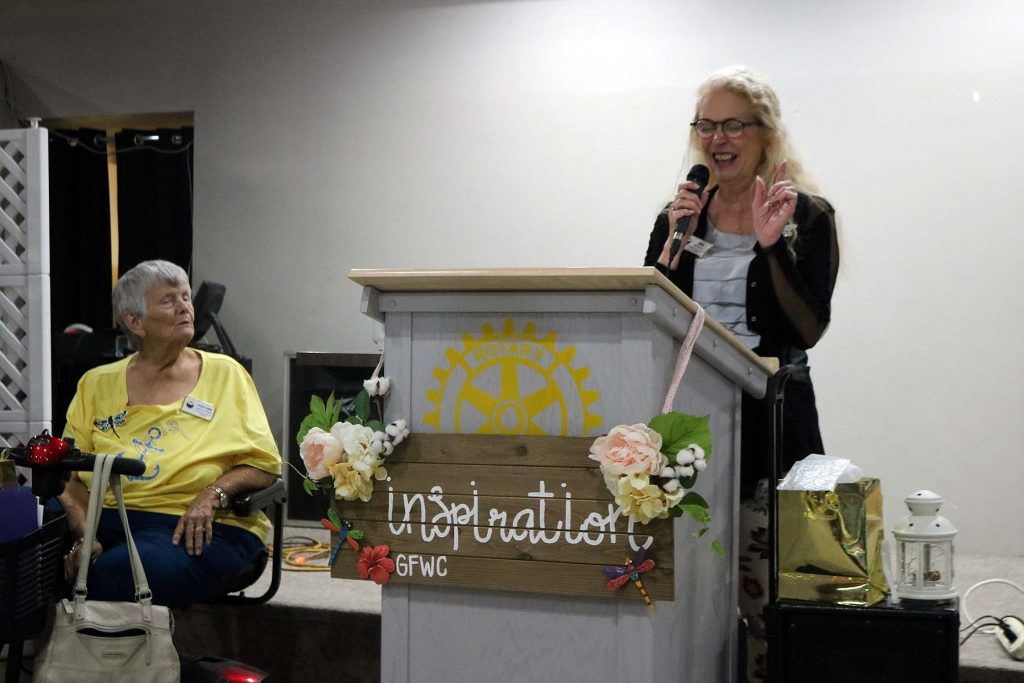 Dee Isguzar has been installed as the 2019-2020 President of the GFWC Woman’s Club of Tarpon Springs. 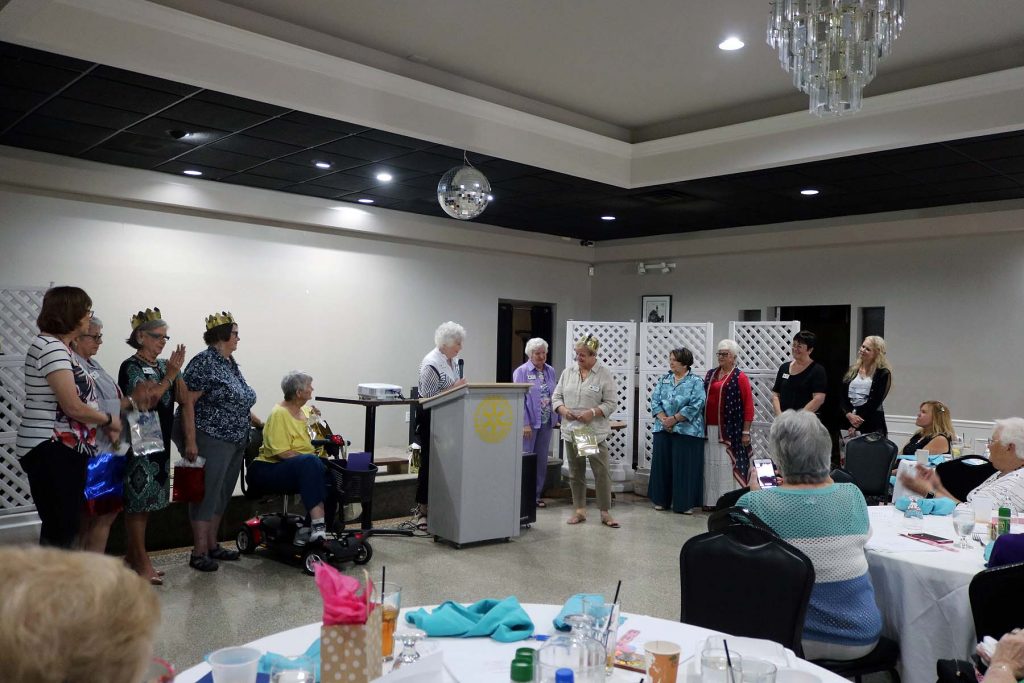 Our past Florida State President Carole Weaver is installing our new board members. 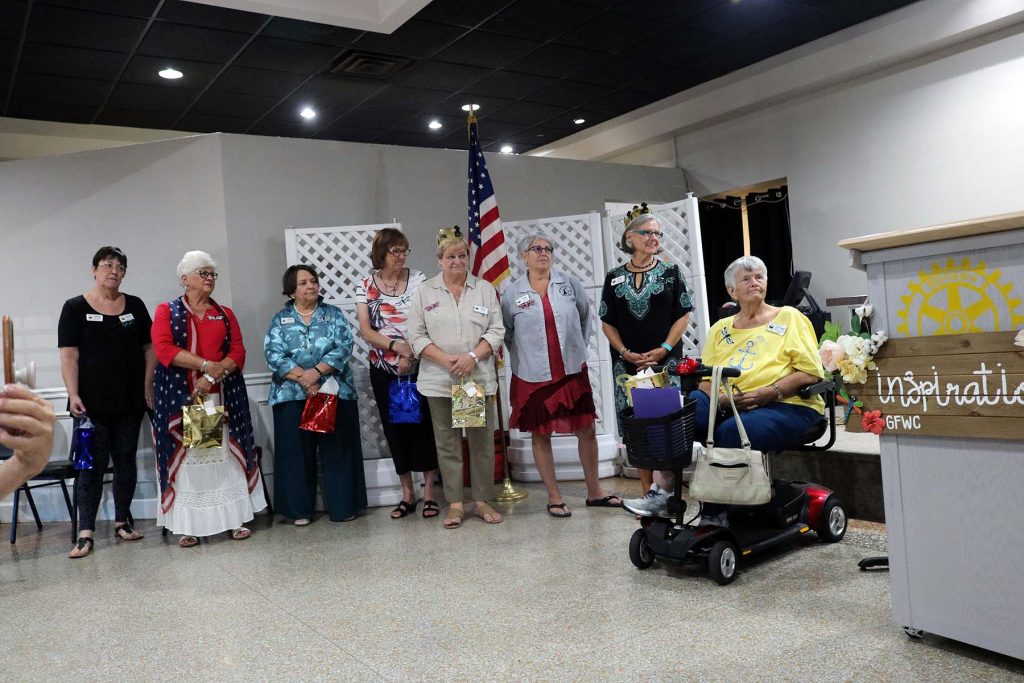 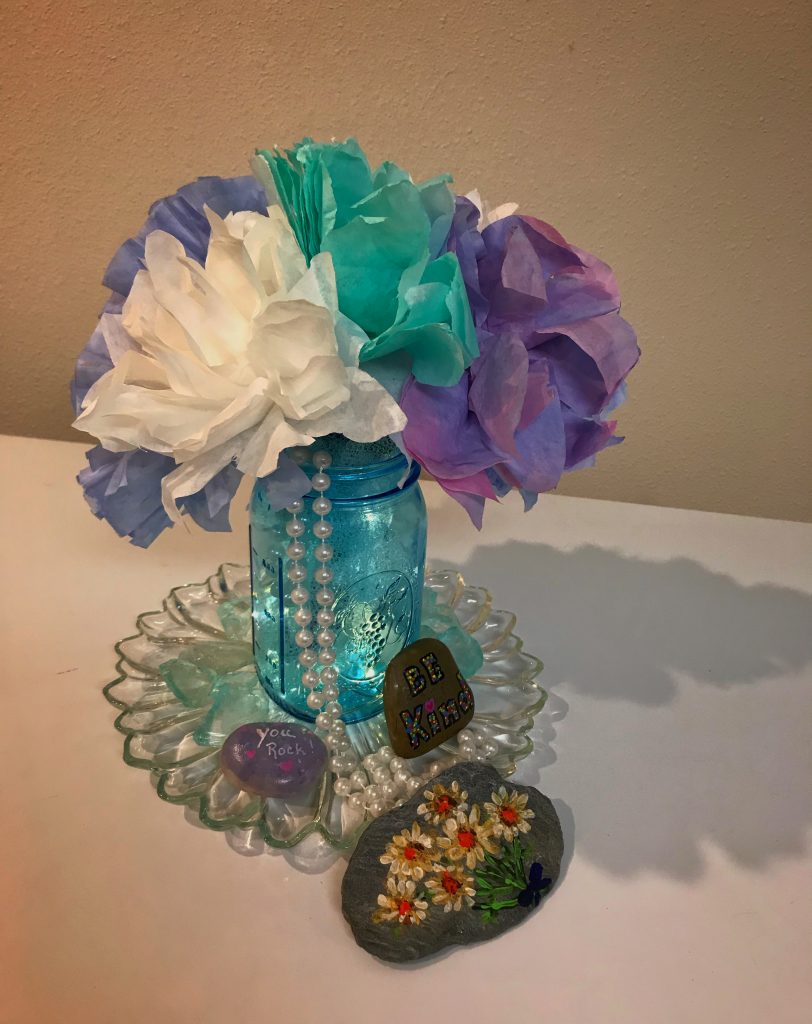 The table centerpiece for our 2019 annual Fashion Show and Luncheon 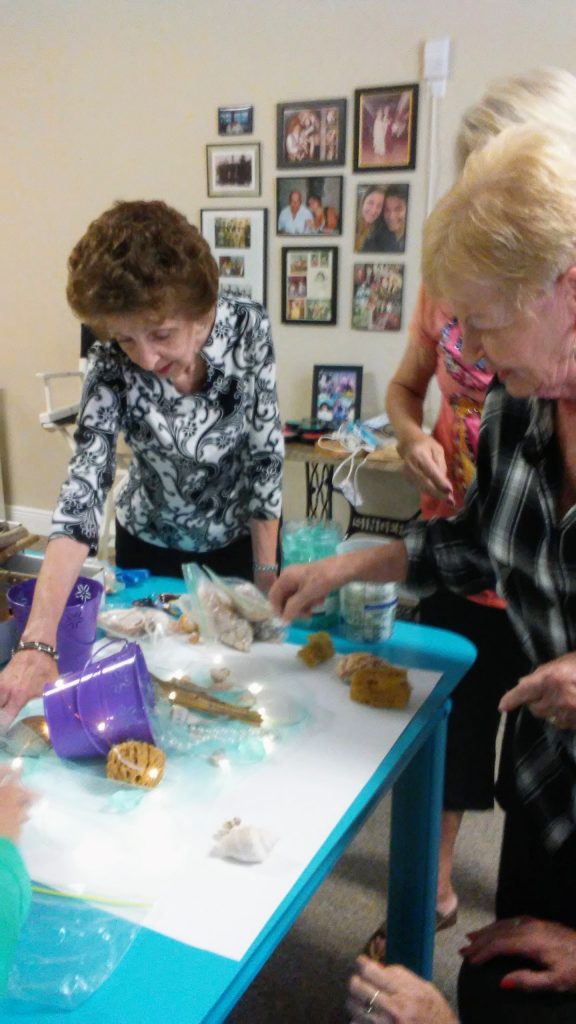 Margo Knighton and Gay Mitchell are arranging a centerpiece idea for our 2018 Fashion Show, which was held at the Heritage Springs Country Club in Trinity. 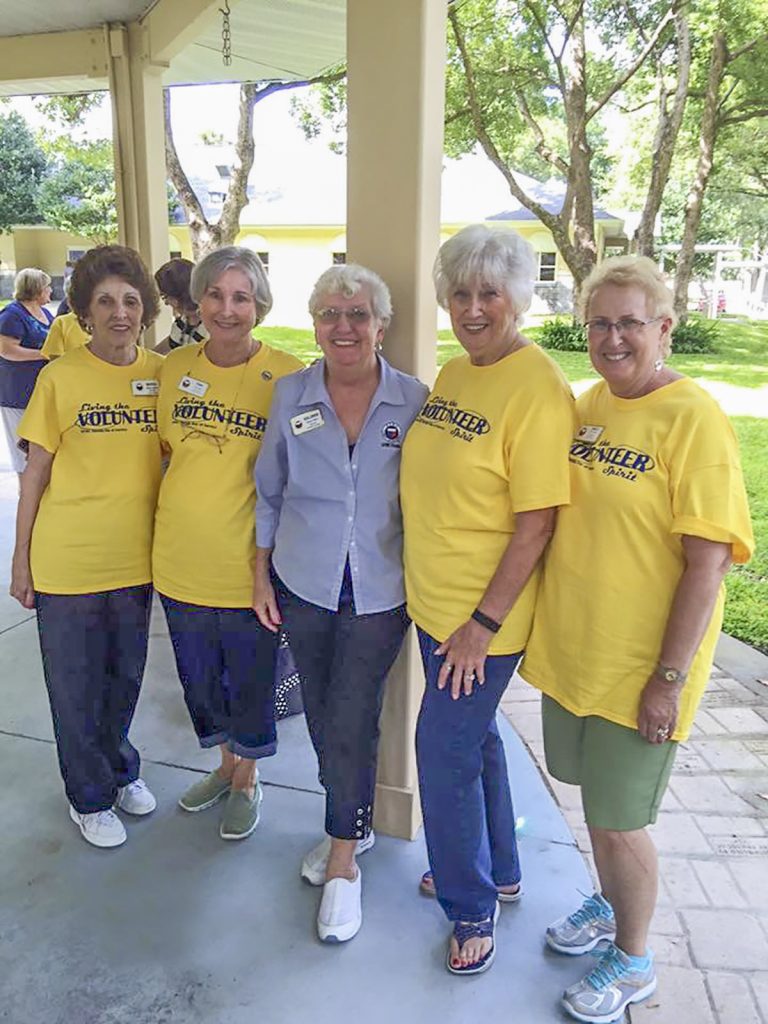 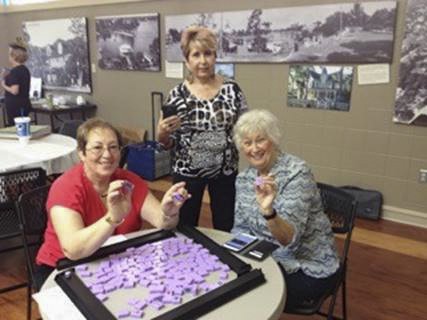 Kathy Kornfeld, Mitzi Hunter and Carole Weaver are having fun with their game at our FunDay fundraiser. 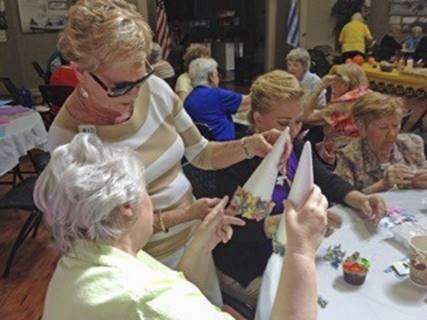 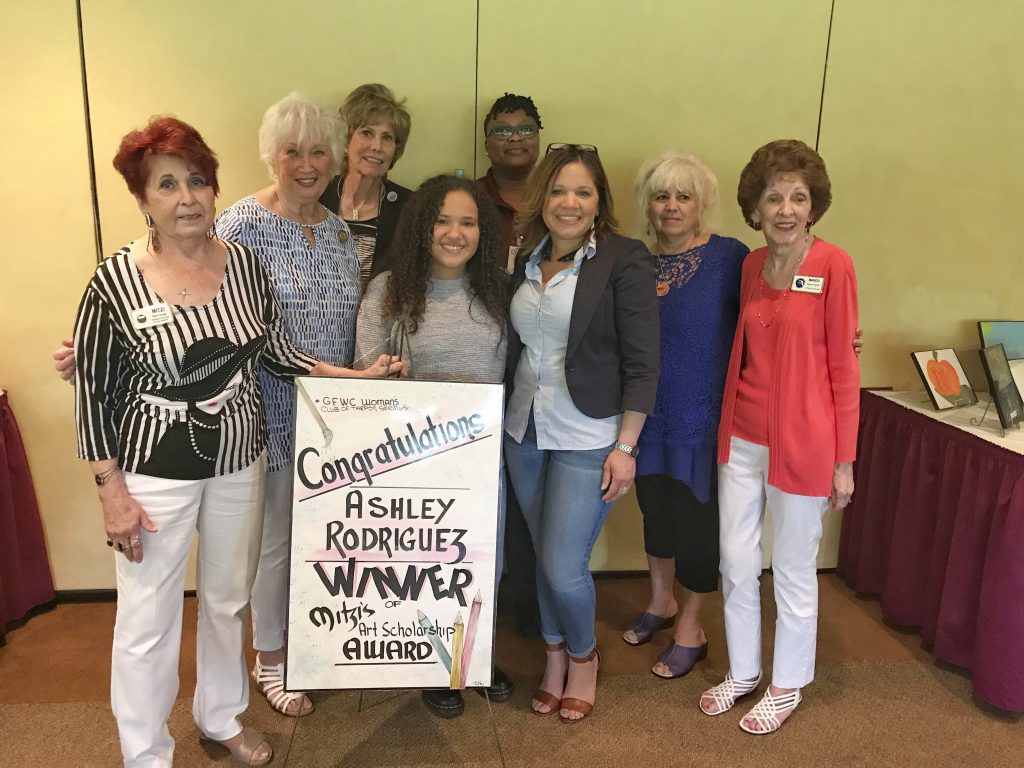 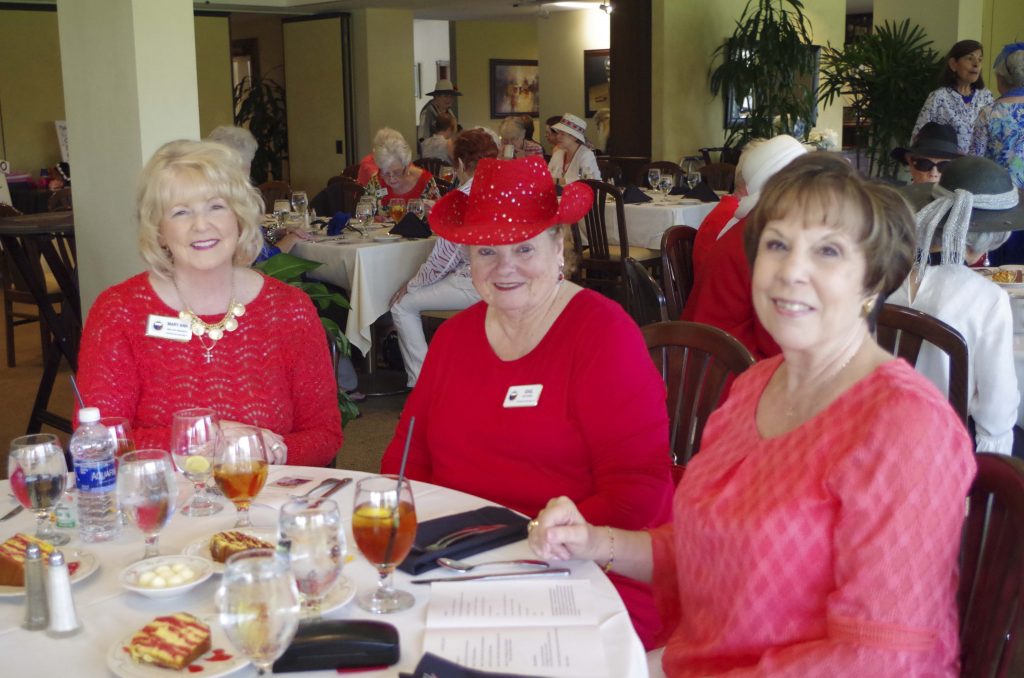 Mary Ann Saravanos, Gail Siddiqi and Judy Cassano are enjoying our February Hat Day. This is always a fun meeting, with prizes for the most popular hat creations. 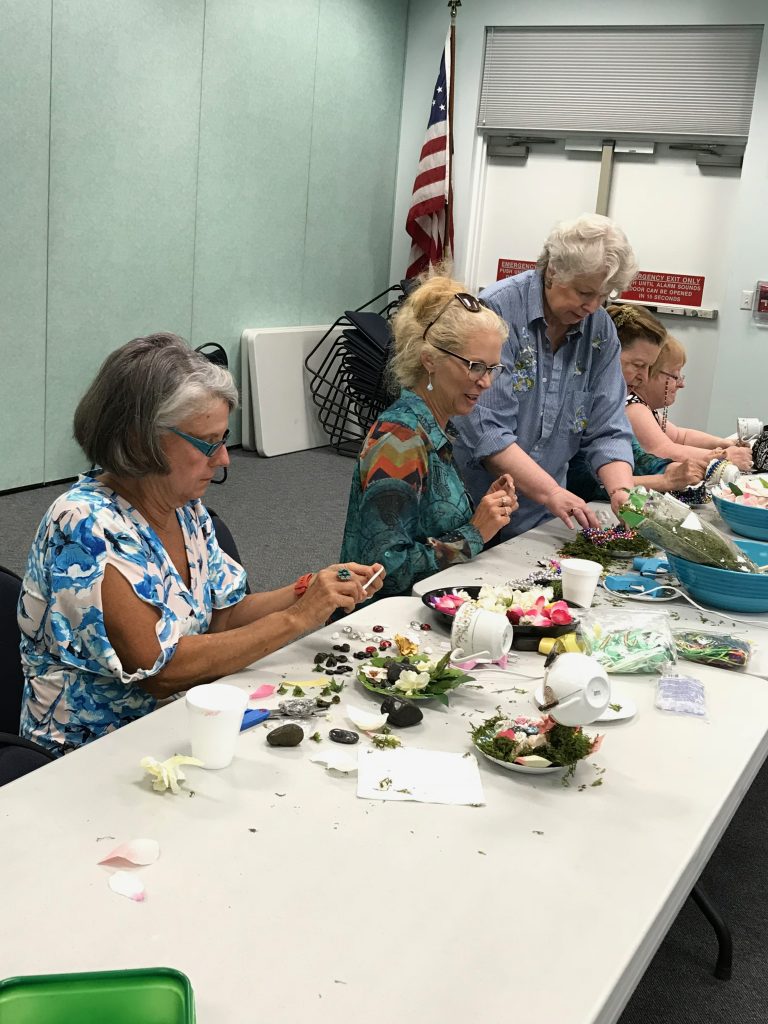 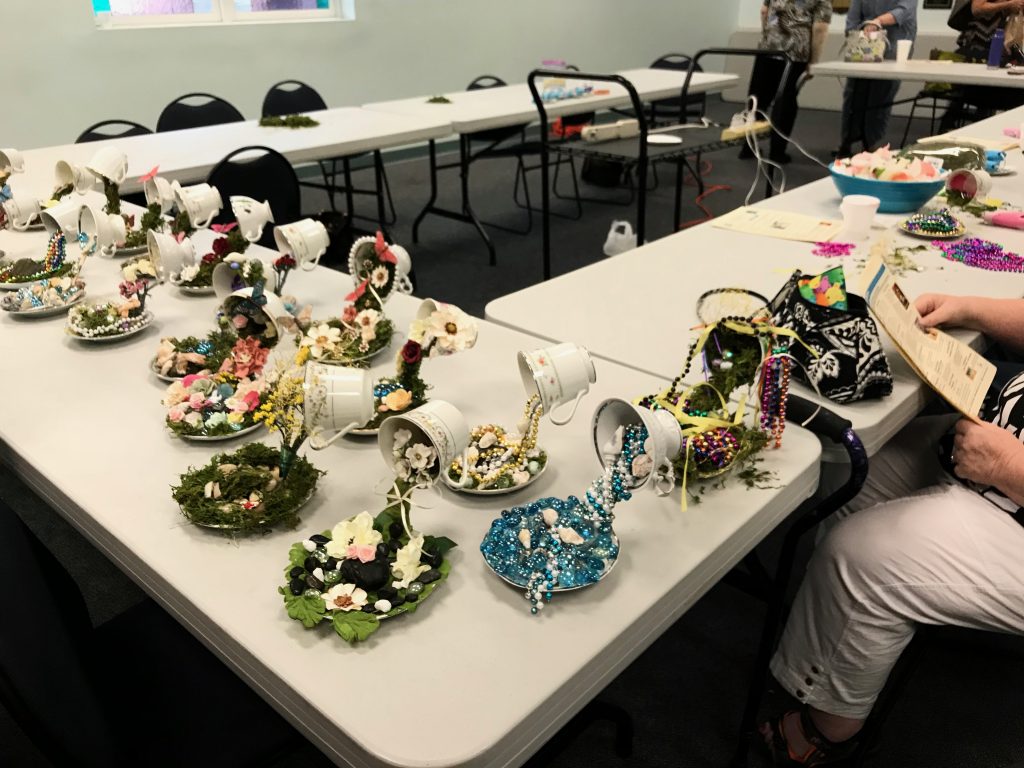 Clever Floating Tea Cups and Saucers will decorate the tables for the September Membership Tea. 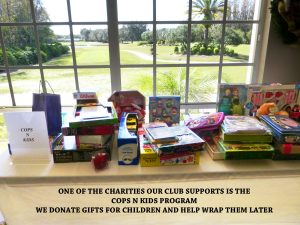 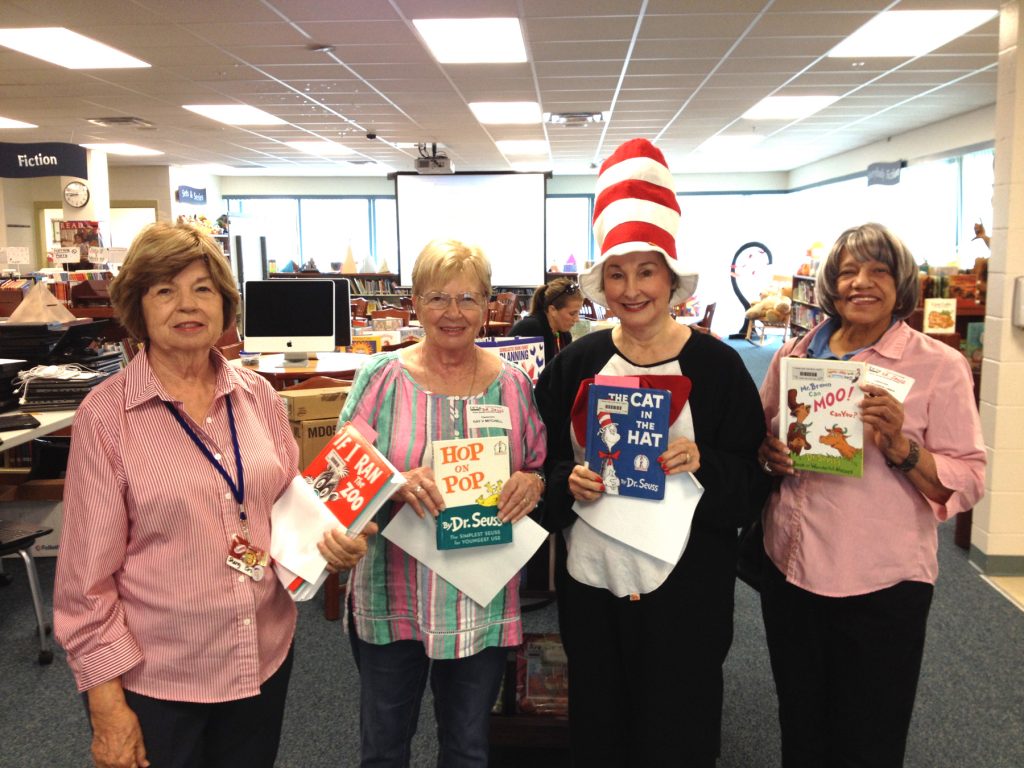 Club members will be reading Dr. Seuss books to children at the Tarpon Springs Elementary School 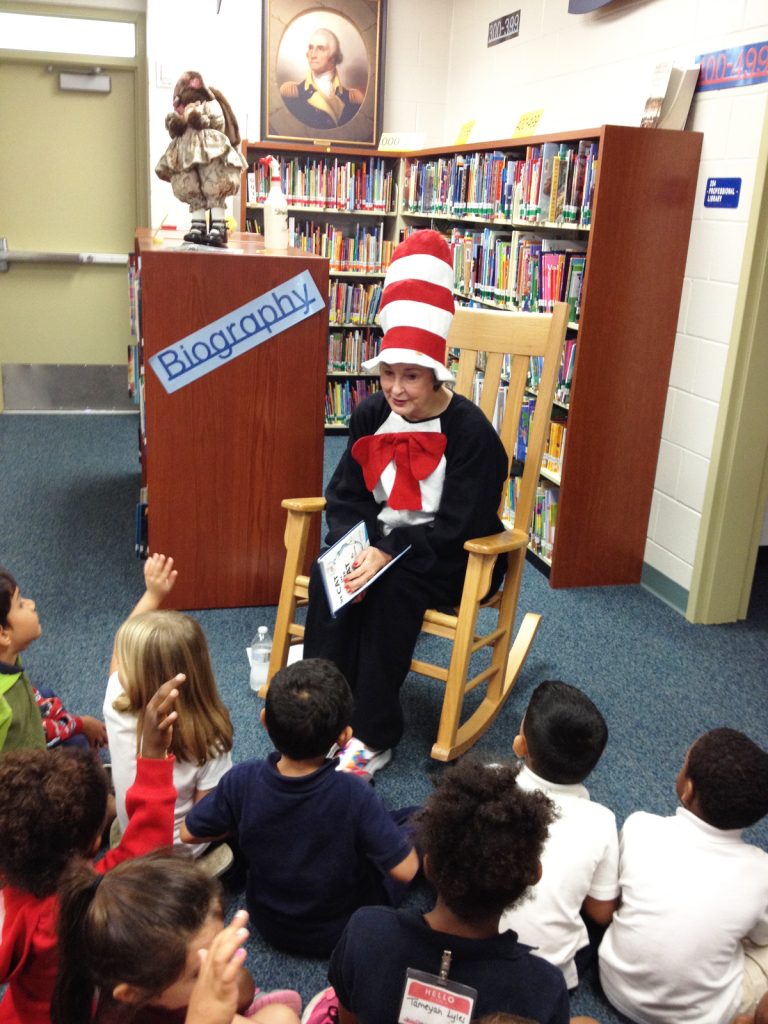 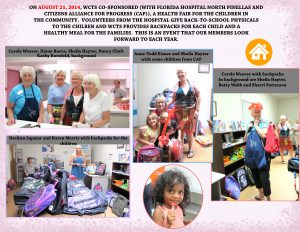 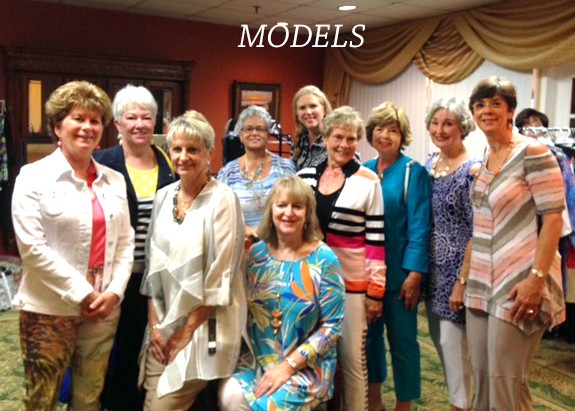 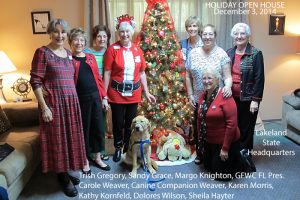 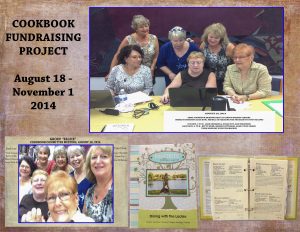