About the GFWC Woman’s Club of Tarpon Springs, Florida, Inc.

The General Federation of Women’s Clubs (GFWC) is one of the world’s largest and oldest nonpartisan, nondenominational women’s volunteer service organizations moving into its second century of volunteer service in communities through the United States and the world.

The GFWC Woman’s Club of Tarpon Springs, Inc. is one of over 187 clubs in the State of Florida. Our members take an active and vital part in creating, maintaining and organizing activities to improve and promote our communities. 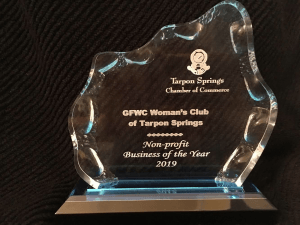 We conform to the qualifications of membership of the Florida Federation of Women’s Clubs and the General Federation of Women’s Clubs. GFWC boasts members in thousands of clubs across the United States, with members worldwide in 20 countries. Each club selects projects that will enhance their towns, and collectively clubs are banding together to tackle issues of state, national and international concern. During 2020-2022, the 7,524 clubwomen of GFWC Florida volunteered 1.3 million hours, participated in 31,000+ service projects and contributed $5.1 million in grants, scholarships, cash and in-kind donations.

In 1892, a group of women headed by Soledad Bonillas de Safford, the wife of the former Governor of Arizona, formed the Women’s Town Improvement Society.  Tarpon Springs was in its infancy at that time, and in addition to cattle roaming the streets, there were no street lights, library, or school buildings.  The ladies cleaned up the streets and raised money to build a boardwalk and the first oil-burning street lamps.  They went out every night to light the lamps, and that is where our logo comes from: “Women Lighting the Way”.  They raised money for the first school building, established a library, and went on to do many things to improve our city.

After 130 years of continuous service to our city, district and state, our club is still going strong with over 100 enthusiastic women who are dedicated to serving our community.

Membership in the GFWC Woman’s Club of Tarpon Springs (GFWCWCTS) is open to those who are in agreement with the objectives of the Club and are willing to work towards its goals. Annual membership dues are $45.00. General meetings of the Club are held monthly from October through May.

Interested in becoming a member? Together, let’s discover ways to support our local community